Dolly Parton led a supergroup in a rousing rendition of “Jolene” as Eminem brought the entire room to its feet at Saturday’s Rock and Roll Hall of Fame gala, which inducted its most eclectic group of legends in years in an ode to rock’s spirit.

“I’m a rock star now!” yelped Parton as she took the stage, fists in the air.

The 76-year-old had tried to decline the prestigious honour because she didn’t feel rock enough — “I didn’t understand at the time that it’s about a little more than that,” she said with her infectious smile.

Artists including P!nk and Brandi Carlile gathered to perform Dolly classics including “9 to 5”, before Parton returned to the stage in a stunningly body-con outfit dripping in chains.

The icon then jammed out on a crystal-encrusted electric guitar to debut her new rock song, which included a mean solo from Parton herself.

“I’ve still got rock and roll down in my country soul / and I’ll be rockin’ it til the cows come home,” she belted.

Eminem delivered a blend of hits old and new, after one of music’s master provocateurs walked out to the quintessential “My Name Is”.

His loyal mentor Dr. Dre inducted the artist behind “The Marshall Mathers LP” — one of the best-selling albums of all time — who gained the hall’s coveted recognition in his first year of eligibility.

Dre said he had asked Eminem if there was anything specific the rapper wanted said at the ceremony: “Number one: I want you to tell everybody I have a huge penis,” he quipped.

It was an apt nod to Eminem’s knack for the profane, which routinely bled into the darkly humourous.

The superstar built a massive career off his blistering flow and lyrical talent, but at times fuelled it with eyebrow-raising controversy.

Eminem invited none other than Steven Tyler to perform “Sing For The Moment” which samples “Dream On”, and Ed Sheeran made a surprise appearance to sing Dido’s “Thank You” sample in “Stan”.

The now 50-year-old then donned his glasses to read his acceptance speech, touching on the obstacles he overcame including a troubled childhood and addiction struggles.

But he spent most of his time at the podium thanking dozens of fellow rappers.

“They say it takes a village to raise a child. Well it took a whole genre and culture to raise me,” he said. “I’m a high school dropout, man, with a hip hop education, and these are my teachers.”

“And it’s their night just as much as it is mine.” 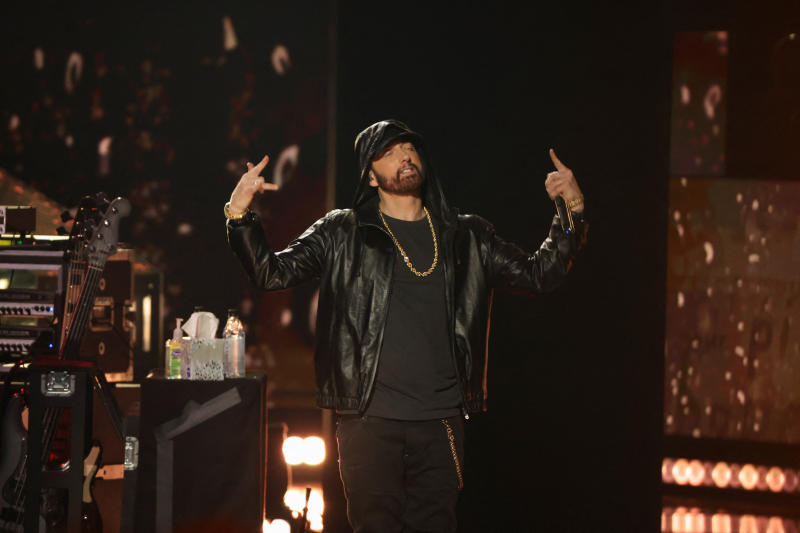 The 2022 class saw the hallowed institution continue to bring rappers, pop, R&B and country stars into the hall’s fold.

“Rock and roll is not a colour, it is a feeling, it is a vibe,” said Richie to a chorus of cheers.

“If we let that vibe come through, this room will grow and grow.”

Synthpop pioneers Eurythmics — the duo comprised of Annie Lennox and Dave Stewart — also took their place among rock’s greatest, but not before delivering a performance that included their classic “Sweet Dreams (Are Made Of This)”.

And Duran Duran met the moment with a best-of medley including “Girls On Film” and “Hungry Like The Wolf”.

But the British group also held a sombre moment for former member Andy Taylor. Frontman Simon Le Bon read an open letter from the guitarist that revealed he had been struggling with stage 4 metastatic prostate cancer for years.

But Taylor said he was “sure as hell glad I’m around to see the day” that the hitmakers made it into the rock hall.

Simon, known for her deeply personal songwriting, was inducted by Sara Bareilles but unable to attend, as two of her sisters recently both died of cancer.

“One of the greatest things about music,” Simon said in a message read by Bareilles, “is its uncanny knack for making physical art out of formless emotions like joy and pain.”

Pop sensation Olivia Rodrigo then took the stage to perform Simon’s seminal 1970s hit “You’re So Vain”, as audience members including Carlile and LL Cool J bobbed their heads and sang along.

Inducted by Sheryl Crow, Benatar and Giraldo delivered a heart-thumping rendition of their top songs including “Love is a Battlefield” and “Heartbreaker”.

And none other than Bruce Springsteen, who attended Saturday to give a special induction to master producer Jimmy Iovine, took the stage to perform alongside John Mellencamp in honour of the late Jerry Lee Lewis.

The Boss slayed a fiery guitar solo as the band delivered a rollicking version of the original hall of famer’s “Great Balls of Fire”.

Wikipedia back in Pakistan after ‘blasphemy’ ban

Farewell Khru Mued | Thai PBS World : The latest Thai news in English, News Headlines, World News and News Broadcasts in both Thai and English. We bring Thailand to the world