EU institutions will sit down on Monday to begin drafting a final version of an anti-coercion trade instrument. (File photo)

BRUSSELS: The European Union (EU) is quickly advancing with a powerful new trade weapon designed to curb economic bullying by China and other actors, but Brussels is girding itself for a scrap over who decides when to use it.

EU institutions will sit down on Monday for what are expected to be prickly negotiations to try to carve out a final version of the hotly anticipated anti-coercion instrument.

The tool will allow Brussels to slap countries with tariffs, quotas or market entry freezes if they “interfere in the legitimate sovereign choices” of the EU or its member states “by applying or threatening to apply measures affecting trade or investment”.

After a lukewarm response from EU nations, it gained popular support following China’s alleged coercion of Lithuania after the Baltic nation deepened its ties with Taiwan.

Then came Russia’s invasion of Ukraine which exposed the bloc’s reliance on Russian energy – so much so, that some hoped the instrument would be ready to use by next year.

On Monday, negotiators from the European Parliament, Council and Commission will begin efforts to thrash out a final text, based on the positions all three have developed from the initial proposal.

Three rounds of talks are planned before Christmas, but lawmakers are already fuming about what they describe as an attempted power grab by the council – the legislative body made up of diplomats and officials from each member state – that they say would leave the tool vulnerable to the sort of coercion it is supposed to prevent.

The council’s proposal would allow member states alone to determine whether coercion has taken place following an investigation by the commission. The decision would be adopted by a qualified voting majority, meaning it would not require the sort of unanimity that often stymies EU foreign policymaking.

“This would be absolutely unheard of, be unprecedented, because the concept does not exist elsewhere [in EU policymaking]. It would not be illegal, but it is quite audacious,” said David Kleimann, a visiting fellow specialising in EU trade law at Bruegel, the Brussels think tank.

Council sources said the clause is a “red line” from which they will not budge. There is concern about handing over too much power to Brussels, which already has huge control over trade policy, while the parliament is perceived in some quarters as being too protectionist.

“We at the council will not backtrack on this,” said a diplomat involved in talks, confirming that it will make it nearly impossible to include it by the end of the year.

But the European Parliament “also has our red lines”, said Marie-Pierre Vedrenne, a French MEP and member of the chamber’s trade committee.

“This position would be counterproductive and would undermine the instrument by providing additional tools to third states to divide us and weaken the instrument. The parliament cannot let this instrument, which guarantees our sovereignty, be weakened and lose its dissuasive character.” 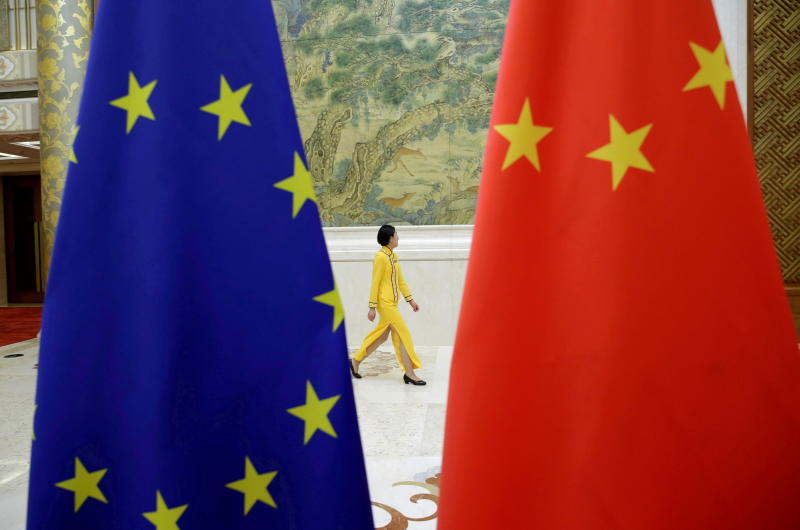 An attendant walks past EU and China flags ahead of the EU-China High-level Economic Dialogue at Diaoyutai State Guesthouse in Beijing, China, on June 25, 2018. (Photo: Reuters)

Another parliamentary source involved in the talks said such a clause would allow China to pick off EU members who were particularly reliant on its economy.

“Why open yourself to this sort of pressure from third countries? You have a couple of member states which will surely be under a lot of pressure to go a certain way, you find a way to sway a couple of others, and all of a sudden this instrument becomes useless,” said the source, who did not want to be named.

Meanwhile, the EU has yet to decide whether to advance to the panel stage of its World Trade Organization (WTO) dispute with China over an unofficial boycott of Lithuanian goods.

While senior trade officials are keen to take a stand in Geneva, there are concerns about deepening the feud with China at the top level of the commission, while some member states are also thought to be reluctant to take the case further.

After Lithuania permitted the opening of the Taiwan Representative Office in Vilnius last year, exporters reported they were frozen out of the Chinese market.

According to Chinese customs statistics, imports from Lithuania dropped by 81.4%in the first 10 months of 2022, compared with a year earlier.

Daughter says Thaksin will find his own way home