His Secret Obsession Reviews Can You Really Get Your EX Back 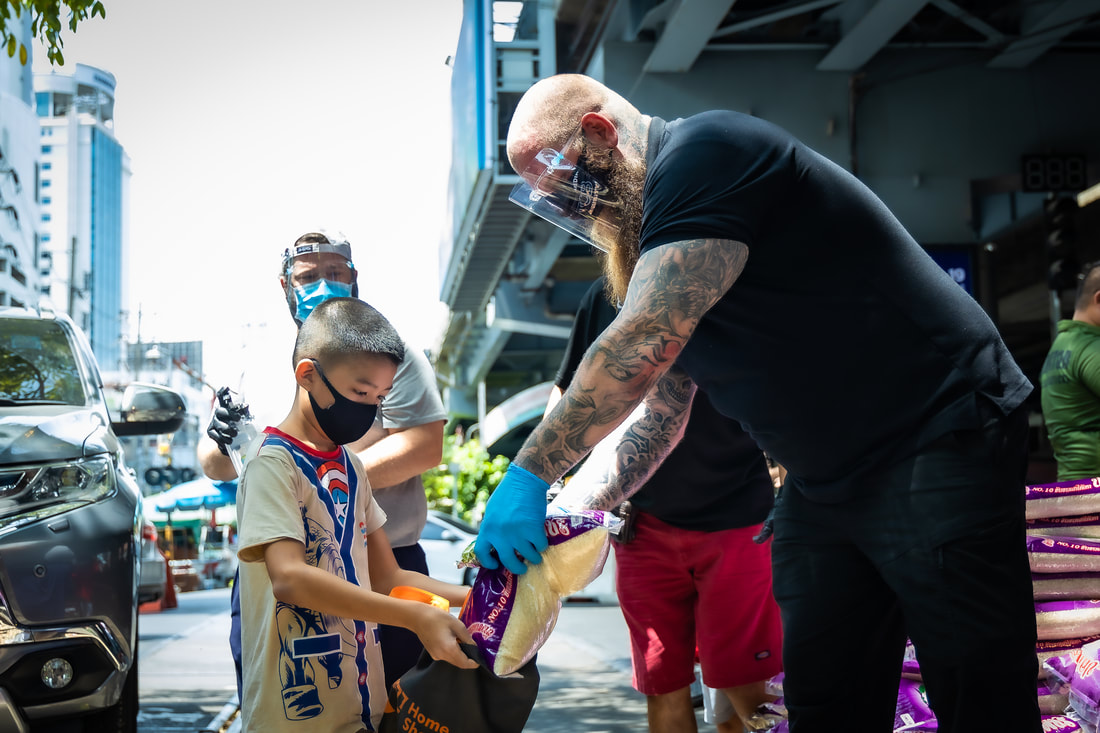 How three farangs and their volunteers are helping those who need it the most during the lockdown. Now they need your help with donations
By Robin Westley Martin

While scrolling through Facebook earlier this month it was impossible to miss the pic of this giant of a dude with a beard and massive tattooed biceps. He looked like some of the biker crews I knew back in the UK. What had most struck my attention about him, though, was that he was part of a group of ‘farangs’ (foreigners) who were handing out food parcels to little kids and their grandparents, in hidden parts of Bangkok.

In some of the most impoverished parts of the city, home to the cash-strapped denizens of Bangkok’s underbelly, there these guys were … giving out essential supplies to families badly in need of a little TLC – and even more so thanks to the coronavirus-generated restrictions.

OK, game on … I needed to know more about this hombre.

I ‘friended’ him, and within an hour he had got back to me. The guy I had chanced across was Sebastian Bergstroem (Biggie) whose Viking blood had brought him from Sweden to Thailand in 2015, when he had started a security company offering close protection, followed by an events and media company in 2019.

Both these ventures required close interaction with individuals or the public, and Biggie saw quickly that his businesses would suffer because of the rapid spread of the coronavirus. In January 2020 he quickly moved to open up TCB Medik to provide facemasks and 70 percent hand gel, etc. It was this decision that has been able to keep his businesses afloat.

Since arriving in Thailand, Biggie quickly made many friends, both Thai and foreign. “I know a lot of people in Thailand, and some of my older Thai friends had begun to text me, reluctantly asking for food and help because they didn’t have any income and the government wasn’t responding.​

“I helped out some of them, and saw face to face how they and their neighbours were suffering. Right then I decided I wanted to do more. I knew that my Dutch friend Friso had started a food donations programme, and that his mate Greg had joined him. I offered them my help too, and nearly three weeks ago we all teamed up together,” said Biggie.

I did a bit of looking around online, and I found that posts about three foreign chaps living in Thailand were beginning to be noticed on social media, attracting a lot of attention. They had organised caravans of donations, heading to the poorest areas of Bangkok … the jungle drums had done their job, and wherever they set up their tables there were soon long lines of destitute city dwellers queueing up. Biggie invited me along to one of the giveaways and introduced me to his partners in the donations project.
​
The three people in question, then, are Friso Poldervaart, Greg Lange, and Biggie. Friso, with his business partner Johannes, had set up Dinner in the Sky, a restaurant hoisted up by a crane 50 metres into the air. After having served thousands of people with five-star meals whilst hanging suspended in the sky, Friso and Johannes wanted to help people, and give something back to the local communities. Greg is a businessman and owner of Sunrise Tacos restaurant in a dozen or so locations around Bangkok, with over 20 years’ experience of living in Thailand.

It was Friso who had started the ball rolling on this project, along with Johannes Bergstrom, Patrich Andersson and Bunyapat Phochailerd, but as soon as it began Greg also offered his help. Friso already knew Greg, but over the last few weeks they have bonded really well, and the same goes for Biggie.

Bangkok can actually be quite a small foreign community, and everyone seems to know each other somehow. These three guys who had unexpectedly found themselves working together quickly formed a strong connection, and are raising the bar on everything they touch to the next level. They seem to feed off each other and keep coming up with fresh ideas, to support the new requests they keep getting. 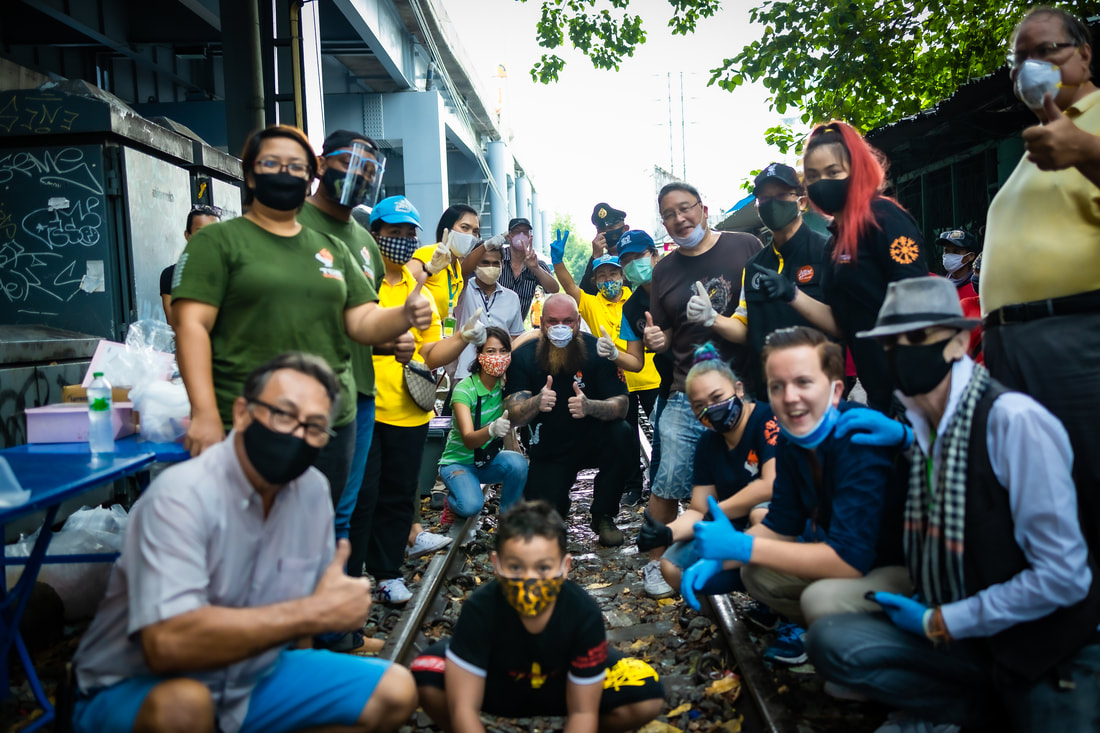 Their team is giving sustenance to those living in slum communities, as well as to the homeless, and refugees … and they also visit the disabled they are told about. For those who are unable to make it out to the giveaways, food and supplies are delivered to them in their own homes. Friso, Biggie, and Greg each have their own little area of expertise and that works very well. They have their own networks, too, and their own circle of friends, many of whom are also coming on board to help out, if they can.

It was only at the beginning of April that this donations project – which now goes by the moniker of ‘Dinner from the Sky’ – began rolling out. They expected things would grow, but it quickly exceeded all their expectations. For the first outing, they posted a request on Facebook that they needed to use a large kitchen in order to prepare 300 meals for some of the poor in the Klongtoey slum, which is Bangkok’s biggest.

Right away Greg offered his restaurant on Silom Soi 4. Friso, Johannes and a few others arrived at 4am in the morning, and Greg was there waiting. They cooked the hundreds of meals they were going to hand out, and boxed them up, all by themselves. Greg offered to help with distribution through his connections, and he arranged to hand out the meals with the aid of a local foundation based in the slum.

From then on Greg and his staff have tirelessly worked in the restaurant kitchen throughout the nights to prepare the thousands of meals that are still being handed out around the city. And the Three Amigos are there at every giveaway, both supervising and handing out the supplies.

Now, as their fame has spread, they daily receive requests for help from community associations in all parts of Bangkok. Biggie has set up a donations website, and to date the three have collectively raised about 800,000 baht in total. Every single baht goes to buy the food, milk, bags of rice, soap, cooking oil, cans of fish, et al, and hand it out to the neediest in out of the way parts of the city. All the work is done by volunteers, and the teams you see staffing the donation destinations are giving their time and work for free. 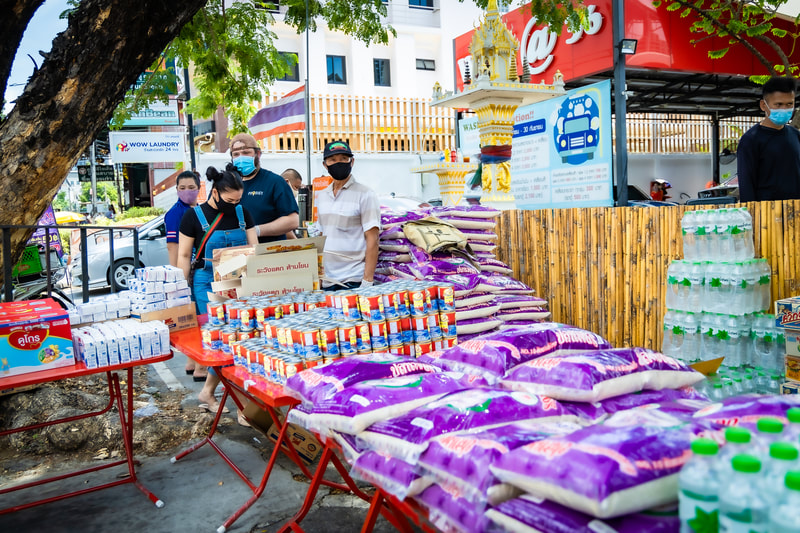 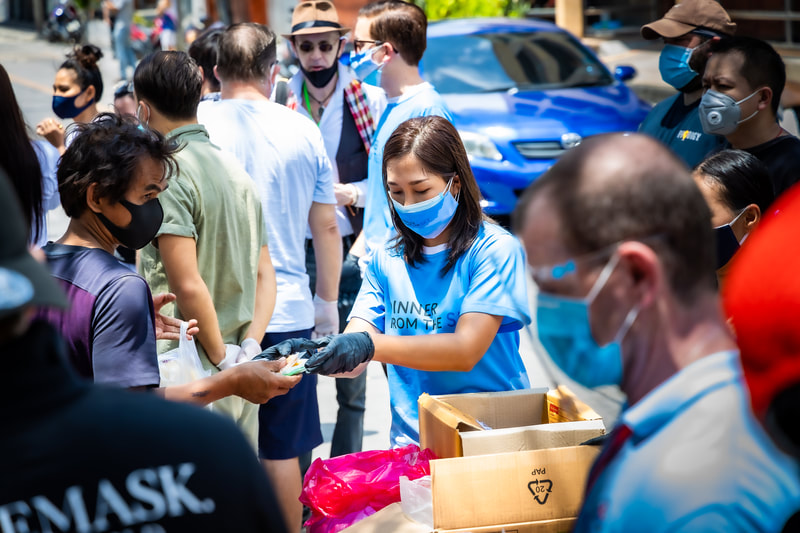 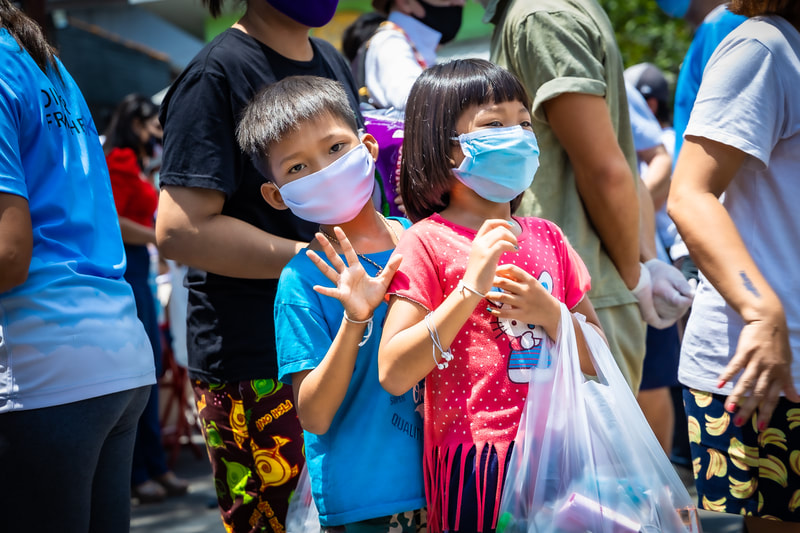 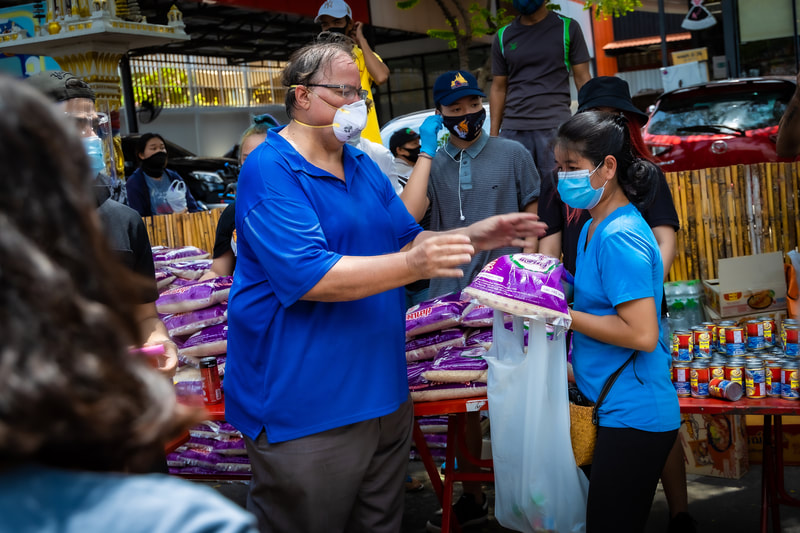 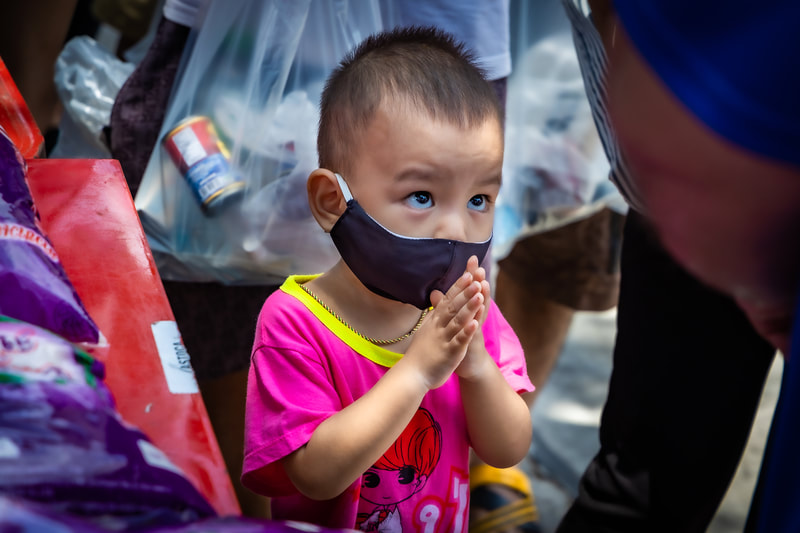 Including, as well, a lot of donated clothes for men, women, and children
And these numbers continue to grow, as they go out to different locations three or four times a week. As I write this article Dinner from the Sky is planning to dispense their reserves to 1,000 individuals in a single day, up from around 600 per outing.

I joined them for three days, to help out, and to see first-hand exactly what was going on. On the first day I was asked to meet them near Sukhumvit Soi 1, where the railway tracks meet the main road. You may have walked across the tracks here many times yourself, on the way to one of the many nightspots on lower Sukhumit, without realising that there are hundreds of people living right next to the railroad tracks, in their little wooden huts, only a few yards away. There are many such places in Bangkok, and you might be surprised just how many.

I arrived at 10 in the morning, and the plan was to start this latest Dinner from the Sky donation at 11. When I got there I spotted Biggie and went over to say hello, and asked him what I could do to help. Within five minutes I was unloading a pickup truck of 150 5kg bags of rice, and putting them on a pallet next to the tracks, ready to be distributed. Soon a few more volunteers and supplies arrived, in new pickup trucks, or loaded into private cars.

Although the giveaway here was unannounced, it was not long before a line of people of all ages was snaking its way down the railway tracks – the word spreads quickly in these urban clusters. The volunteers were arriving all the time, and I was part of a team of about 20 people. We set up tables on the side of the tracks and loaded them with bottles of water, 600 hot meals, bars of soap, cookies, tins of fish, facemasks, packets of dried noodles, baby milk formula, cartons of regular milk, and even candy and toys for the kids.

When all was ready, the police and uniformed officers (Tessakit) from the Bangkok Metropolitan Authority helped to control the lines. One of the team checked the temperature of the people waiting in line, and another sprayed them with hand gel, before they proceeded onwards, clutching their bags, ready to be filled with stuff to help them get through the next few days, at the minimum.

The volunteers and helpers are now well-rehearsed, and the people waiting for their food and drink pass along the lined-up tables stacked with goodies quickly; the team members, who are a mix of farang and Thai, put the bags of rice into their outstretched arms, or fill their waiting bags with the boxes of food or other goods rapidly and efficiently.

I wondered how long they would continue doing the giveaways, and they all told me they would continue until things started to get back to the ‘new normal’, and they were able to resume their various businesses.
​
I then asked them about the future, and Friso, as spokesman, said, “We did not really know much about these underprivileged, poor communities that exist around Bangkok. We have talked together about this, and we know that even when Bangkok is able to get back to work, that the people in these poor communities – like these guys that live next to the railway tracks – will still be there, and they will still be poor. When we are back at work we will still help, by going to at least one place a week to give out donations, as we are doing right now. We will not just stop. How could we?”
If you would like to help out they are now a registered charity foundation…please go to this site and check them out … https://www.facebook.com/BkkCommunityHelp/
ShareTweetShare

His Secret Obsession Reviews Can You Really Get Your EX Back