Welcome to Tumblr. Now go away.

The Tumblr mobile application is seen on a mobile phone. (Photo: Reuters)

NEW YORK: Michele Catalano had mostly positive memories of Tumblr. When she joined the platform in 2009, two years after it started, it was a fledgling microblogging site with a friendly feel, she said, and a sense of community.

“I made so many friends,” Catalano said. “Everybody got along. It was creative. We saw couples get together and get married.” Like many users, though, over time she found herself migrating to Twitter, eventually leaving Tumblr altogether a few years ago. After billionaire Elon Musk completed his purchase of Twitter in October, Catalano, 60, decided to rejoin her old standby.

The welcome back was not warm.

“I made like two posts, and then I checked my dashboard and kept seeing posts about how Twitter people were coming, and it’s going to ruin the community,” she said. “It was hostile. I was like, I don’t need this vibe at all.”

With the future of Twitter uncertain, some users have begun to seek out new platforms like Mastodon, a decentralised, open-source networking service, or returned to stalwarts like Instagram with renewed enthusiasm. Tumblr, which is now owned by Automattic, has also seized the opportunity to court new users, posting a Twitter thread this month with a list of “reasons to join Tumblr.” Recently, the platform gained at least one high-profile defector when actor Ryan Reynolds announced he would be leaving Twitter for Tumblr.

Tumblr does appear to be seeing an uptick in new users. In a tweet, the company’s CEO, Matt Mullenweg, reported a 58% increase in Tumblr’s iOS app downloads and a 57% increase for Android users in the first week of November. (On Nov 1, Tumblr changed its community guidelines to allow nudity on the platform, which may have also contributed to the uptick.) And Tumblr users say they are seeing long-quiet blogs reactivating after years of dormancy or new ones popping up.

Some Tumblr veterans are treating the potential mass migration as a threat. After Reynolds’ announcement, Tumblr was flooded with hashtags like #TwitterExodus and #TwitterApocalypse. Some longtime users made viral posts educating new users about the norms on the site, including tips on how to curate the Tumblr “dashboard,” or feed, for example. But others were more apprehensive, cautioning others about what could happen to the community if unwelcome brands, celebrities and other Twitter refugees encroached.

Dana Reback, a market researcher in Los Angeles who has been an active Tumblr user since around 2011, said there was some concern among Tumblr veterans that new users would bring back some of the infighting and upheaval that users experienced during earlier iterations of the platform, particularly before the site banned adult content in 2017 and prompted its own mass exodus.

“There were arguments all the time,” said Reback, 30. Now, though, “a lot of that culture seems to have moved to Twitter,” she said.

Still, Reback, who primarily uses her Tumblr account to publish fan fiction, says she and others on the platform are welcoming of incoming Twitter users — provided they understand that they are on already established territory. Tumblr users have developed their own lexicon and etiquette — hashtags, for instance, play a bigger role on Tumblr than they do on Twitter. There’s no public follower count, and reblogs (similar to retweets) are essential to boosting visibility and supporting other creators on the platform. “Likes,” one user cautioned, can function more as bookmarks than endorsements.

“Coming in and observing the space and not trying to make it like the place that you’ve left, but appreciating it for the place that it is, is always valuable when you’re migrating somewhere,” she said.

Sydney Reynolds, 22, is no longer on Tumblr, but in her viral TikToks about the platform she positions herself as an unofficial Tumblr historian. The videos are intended to both educate those who are not familiar with the platform’s lore — why, for instance, young adult writer John Green was ousted from the Tumblr community — and to share nostalgia with other Tumblr alumni. 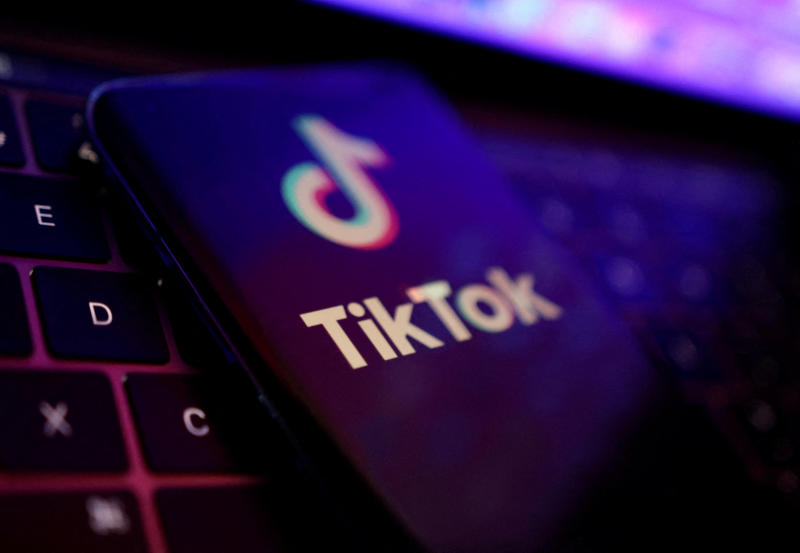 The TikTok app logo is shown on a smartphone. (Photo: Reuters)

While Twitter has a mainstream appeal, Tumblr has long been a haven for fandoms, she explained, appealing to a niche user base comprising fan fiction writers, artists, role-players and other creatives.

“I was this creative kid who didn’t have a lot of friends, and I found this place where I could write and I could be weird,” she said. If she were still on the platform during a Twitter migration, she would “feel invaded,” she added, although she is considering returning to Tumblr if Twitter collapses.

Reback and others noted that Tumblr users seemed most wary about the influx of big-name users like Reynolds, who might make the platform feel more corporate and less comfortable for the fandoms that populate it. (Although fantasy writer Neil Gaiman is a longtime Tumblr darling.)

But they are not sure there is reason to be worried yet. The differences between Tumblr and Twitter may prevent the former from serving as a true replacement for the latter. Twitter has long been a platform where celebrities, brands, journalists and other public-facing entities thrive. Tumblr, with its aforementioned lack of follower count, typically anonymous user base and focus on the collective user experience over individual success, is not the kind of place that amplifies personalities. That is a large part of Tumblr’s appeal for many.

“There’s a motto on Tumblr that brands and celebrities and whatnot, they just don’t do well on platforms like Tumblr,” said Kristen Lee, 30, an illustrator and webcomic artist who publishes work on Tumblr under the handle @feathernotes. “It’s hard to be an ‘influencer’ on Tumblr because you don’t have access to the information that would make you seem like a big deal. That’s a thing that doesn’t translate as well as on Instagram or TikTok.”

Still, even non-celebrities might find Tumblr’s setup too distinct from Twitter to serve as a successor. Leah Marilla Thomas, 34, a freelance entertainment journalist and an anonymous Tumblr user since 2009, recently created a public-facing account on the platform to share her work in anticipation of Twitter’s demise. “It’s not super conducive to sharing articles, which is what I think a lot of people I know would be migrating to do,” she said.

If this is the end for Twitter, Catalano says she probably will not try out Tumblr again. “If Twitter collapses, I’m free,” she said. “If this is the opportunity that comes to me to back away from social media, that’s what I’m going to do.”

Catalano said those trying to gatekeep seem to have forgotten the purpose of the platform: “It’s a social media website, and people are going crazy that other people may join them,” she said. “It’s bizarre.”

This article originally appeared in The New York Times.

17 going on 16: South Koreans to get younger on paper